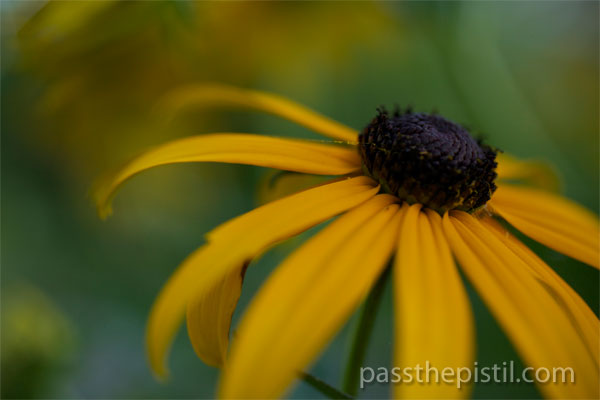 It’s hard to go wrong with black-eyed susans (Rudbeckia spp.). They’re lovely no matter how or where you plant them, pairing well with most other perennials, grasses and shrubs. Try digitalis, salvia, delphinium, hollyhocks, echinacea, Russian sage, bee balm, any bunch grass, ribes…. it doesn’t matter.

At the moment I’m particularly fond of paring them with equal blocks of purple-blues (like sage) and purple needle grass or Mexican feather grass. And I love them when planted in mass. A drift of dark green foliage with long lasting golden, summer blooms against a block of lavender-blue blooms with grey green foliage and the warm texture of grasses in equal blocks. Throw in a yucca or agave (while giving care to meet water requirements or lack there of) and we’ve just created a breathtaking bit of garden.

Better yet, the allure doesn’t stop there. I was looking in on these particular black-eyed susans and nearly missed this busy garden spider. It appeared suspended in mid-air, waiting for it’s next meal to fly heedlessly into it’s web.

Eventually it will most likely take it’s turn as an unsuspecting victim. Providing a tasty and vital snack to a songbird in summer or when dormant in winter.

In general Rudbeckia spp. are easy to grow, requiring modest soils that can be heavy but well drained with moderate to occasional water. Once established they tolerate less water than usually given. They prefer full sun but will also grow in part sun. Snails and slugs enjoy feeding on them. I’ve also had mine taken to the ground by voles, bunnies and deer. Even so, they can rebound. An admirable quality.

Propagate by seed in spring and divide out in late summer and into fall. 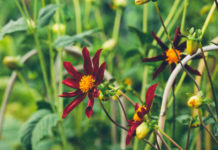 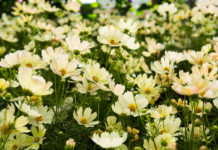 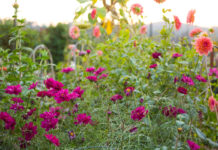