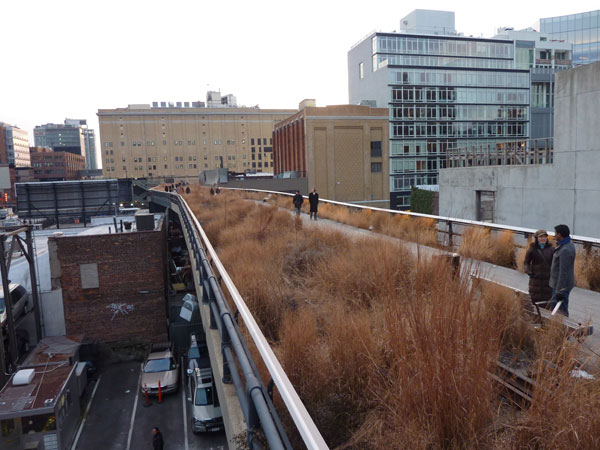 This particular New York City borough alone has it’s own sense of self, uniquely hip while relaxed and confidently transforming.  To climb the stairs to the High Line is to realize a coming of age of an outdoor experience.

Previously a rail line built to remove the dangers of train travel at ground level (10th Ave. was once known as “death avenue” due to the number of accidents between freight trains and other street level traffic).  It connected directly with warehouses and factories and functioned at it’s peak for decades until trucking became an increasingly popular mode of hauling goods and use of the High

Line decreased.  The southern most end was demolished in the 60’s while the remaining sections were saved initially by rail enthusiasts and eventually by Friends of the High Line with the hopes of reuse as public open space.  (High Line History)  Years of planning, research and a “Designing the High Line” competition lead to it’s final stages of development and eventual opening of Section 1 to the public in June of 2009.

Once on The High Line I’m immediately reminded of the sense of calm experienced upon returning from a trip abroad, having been surrounded by all sorts of foreign languages and now immersed in English again.  I didn’t realize the unconscious effort, the need to make sense of the world around me until the stimulus was removed.  Now, all is quiet.  It’s perfect.  From the contemporary path, meandering and inviting, to the chic seating, Piet Oudolf style plantings and the view that is accommodated from elevated advantage and fluid framing.

We wander.  Everyone is wandering.  Possibly as enamored as I am.  Struck by the point of view the park affords and the artful experience it provides.  It may be best in winter.   The grasses and Heuchera look like they just passed peak.  I could very well be an amphibian, soaking it all in through my skin.

Passing through what appears to be a sometimes art space, once warehouse, we find ourselves in between a human fish bowl and a smart group of trees.  Funny, the people in the “fish bowl” (nested in a mini-amphitheater) are occupied watching the people below.  I shift to the trees.  Of course studying the layout.  I count them, examine them (not sure of their parentage, except that the branching is opposite).  What is it about this little grove, organic and not so contrived?  It definitely gives reason to linger.  The Statue of Liberty hiding off in the distance.

All to soon we find ourselves at the gates marking section 2, scheduled to open this coming spring.  And then, after oogling over a crazy parking garage (how does that thing work?), a perfect little coffee and chocolate shop lure us in, completing our walk.

Someone asks, “What was that?” 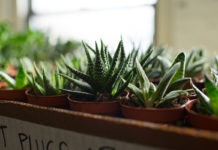 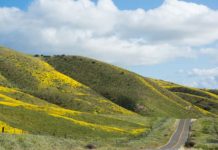 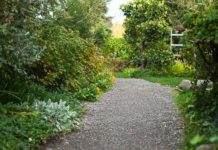 5 Learnings From the Good Shepherd P-Patch